The U6 Jets had their last games for the season today, what a way to finish! All team members had an awesome game with goals going in constantly! The kids certainly earned their end of season party. Nothing better than a sausage in bread and lots of lollies to keep them all on a high. I made some Chocolate Chip Cupcakes from Martha Stewart’s Cupcakes: 175 Inspired Ideas for Everyone’s Favorite Treat

, so easy and so yummy.  I baked them in the Wilton Soccer papers and topped them with some plastic soccer ball cupcake toppers.  Both the cupcake papers and soccer toppers were purchased from a lovely lady called Rosie. She has all sorts of goodies in her online store

Fabulous weather and even better company made for a fantastic day. 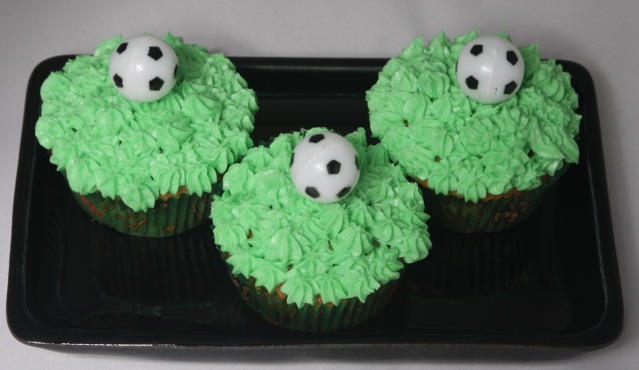 Stir together vanilla and milk.

Cream butter and sugar on med-high speed until pale and fluffy. Reduce speed to low and add flour alternately with the milk mixture beating until just combined after each addition.

In another bowl beat the egg whites until stiff peaks.

Fold 1/3 of egg into cake batter to lighten. Gently fold in the remaining egg white until just combined.

Toss choc chips in remaining tablespoon of cake flour (this stops the choc chips from sinking to the bottom when cooking). Fold into the batter.

Divide mixture among lined pans. Cook until tops are springy to the touch and cake tester comes out clean, about 22mins. Transfer tins to wire racks to cool completely.

Store in airtight container at room temp or freeze for up to 2 months.