Yikes! Scrumdiddlyumptious has passed another milestone, it’s been just over 5 years since my first post!

Not including my intro post, my first post was about some yummy salted caramel cupcakes that I made for my husband’s birthday.
My husband takes most of the photos that are included in my posts, so in a way, this blog is his blog too 🙂 This year we gave him a new camera lens, so I made some tiny camera toppers to decorate his birthday cupcakes. 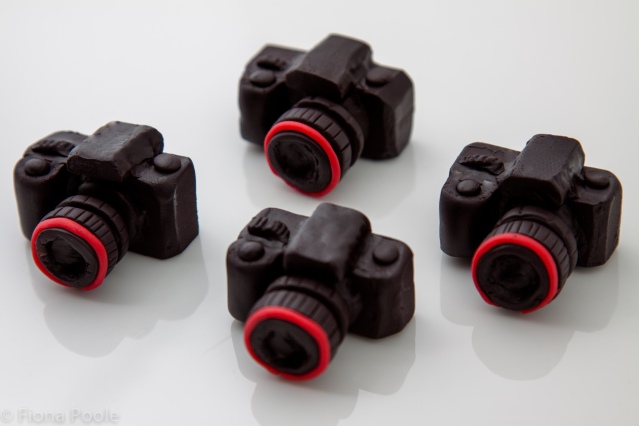 We were away on a trip on hubby’s actual birthday, so the plan was to take the toppers with us to San Antonio and buy some cupcakes there to pop them on and celebrate.

The day before his birthday the kids and I went for a walk to Lulu’s Bakery & Cafe. It was a stinking hot day and we underestimated the distance we would be walking! Anyway, we made it extremely hot and exhausted and sat down for some well earned cold drinks. It was so hot that we didn’t feel like eating anything 😦

Lulu’s is the home of the giant, 3 pound cinnamon roll. This very famous roll was featured on Man vs Food. We sat and watched numerous cinnamon rolls served to diners, they smelt sooooooo good.
After a quick chat to the waitress, we ordered one to go. The cinnamon rolls will last for up to 6 days if kept out of the fridge. So, the birthday cupcakes turned into a birthday cinnamon roll! The tiny cameras sat on top of the cinnamon roll looking very cute. The cinnamon roll itself was delicious, well worth the walk in the heat 🙂

San Antonio, TX is a beautiful city. We enjoyed ourselves there for 4 days, lots of fab food and sights.